Stashbusters! And a story about SWIII 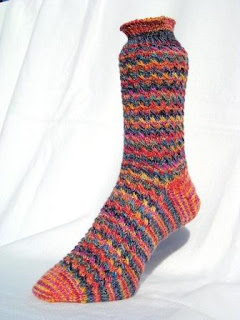 Time to move away from the Sweater Zone and step over into Sock Land. I inhabit Sock Land most of the time by having a pair (or two) on the sticks at any given moment. At this moment, however, I have NO WIP because I've just completed a pair that I started in January.

Introducing - The Stashbusters! These socks were inspired by Sock Wars III which I competed in last year. The contest was an unorganized mess plagued by drama after drama, but that's what makes for good entertainment, isn't it! SWIII started on May 9th with 1153 international competitors vying to be the last knitter standing. I was lucky(?), and did quite well in the contest - finishing in 21st place by finally dying in September after taking down 5 warriors myself . The entire contest ended in October, with a deserving warrior on top of the heap of bodies.
This contest was sponsored by the South West Trading Company, makers of TOFUtsies yarn. Those of you who have used TOFUtsies know that SWTC is very generous with their yardage -providing about 460 yards per skein. The contest sock pattern, The Detonator, was designed a bit too large in diameter, and had a very short leg length. Consequently, it used less yarn than a typical pair of ladies socks, and didn't fit a single one of the 1153 participants. This is probably why the photo on the pattern shows the socks being modelled by a small, hairy-legged man. I ended the contest with several partial skeins of TOFUtsies, each roughly sufficient in length to make one sock. [NOTE: I should mention resoundly that SWTC had nothing to do with the chaos of the contest nor the illfittingness of the Detonator pattern. Quite the opposite - they were instrumental in keeping the contest moving along and motivating the participants.] [Another NOTE: If illfittingness isn't a word, it should be.] 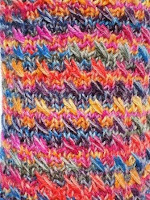 Hence my goal for these socks was to come up with a pattern that would consume the partial skeins. I got a hankering (I'm from Nebraska, I can get those) to play with a slip stitch pattern, so I consulted Ms. Walker and found a simple, yet interesting one with a 4 stitch repeat. I had to modify the stitch pattern to give it a larger vertical gauge so that the patterned top of the foot of the sock would be the same length as the stockinette sole of the sock. That required a half-sock worth of frogging, but it was worth it. The sock pattern uses two colors, that alternate every 4 rows. The two colors I used look really horrible together when the skeins are held side-by-side, but have great energy when combined in this slip-stitch pattern.
During the contest, I got virtually acquainted with the couple that run SWTC - Jonelle and Joe Ruffino. Through that contact, I helped Joe to set up a Knit Night in San Diego while they were in town for TNNA last month. It was great to meet them in person, and to see their family of yarns. Jonelle is lovely lady and an inspiration to all women who have an entrepreneurial spirit. I showed them these socks while they were in progress in January, and now I'll get to show them the completed pair at Stitches!
Now as for that completely unacceptable NO WIP situation... I'm casting on a new pair of socks. It's a new pattern I'm working out, and I'll be using the Knitters Brewing Sock-aholic in Raspberry Mojito. I'm hoping it turns out to be a fairly simple pattern to work, because I plan to be working on it while I'm at Stitches (read: while I'm having cocktails.) Stay tuned!
Posted by Chief Executive Babe at 5:26 PM