It Seemed Like a Really Good Idea at the Time 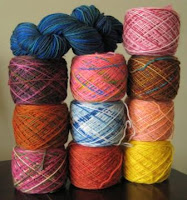 I think it's really important for hobbiests to share stories when they do something, well... stupid, so that others don't make the same mistakes. So here we go...

I'm nearly done with the prototype Mystery Sock for our upcoming knit-along. Without giving away too much, I'll share that the sock includes beaded motifs. It's REALLY cute, and I wish I could show you a picture, but then it really wouldn't be a mystery, now would it?
As I was working out the design, there were a few places in the motif where I couldn't decide whether or not I wanted to insert a bead. So, I rationalized that at the end, it would be easier to get rid of unwanted beads than it would be to put in additional ones, so I went ahead and put in beads wherever I thought they might be appropriate. When I finished working through the motif, I found that there were 7 beads that the world would be better without seeing in this sock, so I went about removing them. Armed with a pair of pliers, I held the sock over a trash can and away from my protected eyes, and squeezed each of the glass beads until they shattered away from the sock. This worked really well for the first six beads. Glass beads. Sharp glass beads. Number 7, which no longer holds any luck for me, cut throught the yarn during its exodus, leaving two very short live ends in the middle of my lace motif. Doh!
Now maybe it's because I do stupid things like this, but the positive note is that over the years I have honed acutely surgical sock mending skills. I transported the patient to an area with good light, donned my magnifying glasses, and quickly rewove the severed row for about one-and-a half-inches on either side of the break. I then tinked the severed yarn back an inch or so each direction from the point of abuse and tied it off to the piece of yarn used for reweaving, wove in the four ends, and voila! you can't tell it happened. The patient has lived, but the doctor now needs an adult beverage.
Since I couldn't share a photo of the sock, I included one I took this morning at the Brewery. The pile of cocktails was just so colorful, I couldn't resist.
Cheers!
PS. Did I mention I picked Memphis in the NCAA bracket. Better luck next year!
Posted by Chief Executive Babe at 5:17 PM