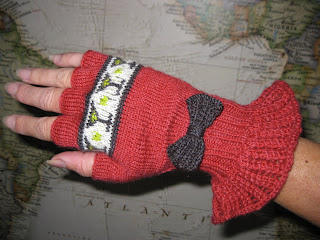 Now that we have a drinking scarf, it's time to work on the next accessory in our winter party wardrobe - drinking gloves! I've worked out the issue I stumbled over during the first attempt at this pattern, and have a completed prototype! I have to say it was fun making a fitted garment for the hand - it was a nice challenge after making so many garments for feet. The tailored shaping gives it a dressy quality, while the martini design and bowtie keep it fun and whimsical. I now need to work on the left glove, and then work through the math of some alternate sizes. This will be important given the fitted nature of the glove, and minimal stretchiness of the colorwork stripe.
I've also been working on With a Twist sock number 2 along with the other folks in the current Knitters Brewing KAL. It's fun to see them in so many colors! I'm about halfway down the leg, and try to give it at least a half-hour per day. Got a lot done on it last Sunday when I took it to the horse races!
The Sock-aholics are gearing up for the Martini Scarf KAL that starts 9/1. There's lots of excitement around this new pattern, and it sounds like many of these scarves will be given as gifts this year. The receivers will love them!
I suffered a hard drive failure last week, but thanks to the Geek Squad, was fully back in action in 4 days - with a brand new PC! It's fun to get new toys :-) I must say the Geek Squad was a great resource - it took them several tries and some serious troubleshooting, but they were eventually able to get all my files off the computer. I am vowing to be better about backing up my computer now, and will be looking into the online backup services. Those sound like a simple solution.
Cheers!

Posted by Chief Executive Babe at 11:07 AM