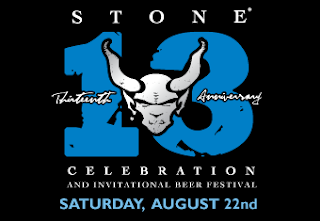 This is the story of one of those knitting ideas I have that seem great at first, then kind of fizzle away, and eventually wind up with a happy ending. I guess it could be one of those cheap dime-store knitting romance novels, if they existed.

Stone Brewing Company is one of the many fine breweries in SD county, and is probably the largest and most widely distributed of them as well. You may be familiar with their Arrogant Bastard Ale, which in my opinion can hit the spot when called upon to do so. ;-) Stone has been in existance for 13 years now, has been growing steadily, and is also involved in distribution of other smaller ale labels that they partner with. I've also noticed that they seem to like to collaborate with other business to produce such things as hot sauces, bbq sauce, and mustards that contain their ales. So last summer I thought, "Why not Stone socks?"

Mid-summer, Stone announced their 13th Anniversary bash and introduced a new logo. They have always had gargoyle-themed labeling, and generally, their designs are quiet intricate and aren't very suitable for intarsia work. When the anniversary logo was released, I was quite pleased to see that it was going to be chart-able. I have some software that's made for converting photos to counted cross stitch patterns, and it works equally well for creating intarsia charts, so I plugged the gargoyle in, and got a reasonable chart that is about 40 sts wide and 48 rows high.
I then went about designing a mens' sock to put the design on, and brewed up a new color, Arrogant Bastard Brown (which I am only using for personal use at this point), to make it from . The sock features top down construction, and is covered with a basketweave-ish slip stitch pattern everywhere except where the logo is positioned on the outside of each calf area. The logo is done in natural "white".
All the time I was doing this design work, I was getting increasingly excited about how this sock could set a whole parade of brewery-based socks into motion. How fun would it be to do all the local breweries, and then start hopping around to places like Colorado to do a New Belgian Brewing sock (Fat Tire Ale), or to SF for an Anchor Steam sock, or Seattle for a Red Hook sock - whew! the possiblities are endless.
Once I started the sock, however, my tone started to change. I decided that the commercial appeal of this project would be limited for several reasons. First, while the male beer drinking market share is quite substantial, I'm just not sure there are enough knitting wives, girlfriends, and mothers of Stone drinkers to drive a demand for the first sock in the series.
Second, the sock turned out to be technically difficult to make. As the gargoyle design is only on one side of the sock, stranded colorwork is really not an option as it would just lead to unnecessary tightening of the sock circumference. This leaves two options: work the leg flat in intarsia and then seam it (a concept I just can not endorse), or intarsia in the round. I chose the latter, which is probably the most difficult technique in my arsenal. For those of you who have never done it, I'll give you a short summary...
The first round of the colorwork goes great. You get your main color in your right hand and your contrast color in your left hand, and you just go to town switching back and forth between the two and get pretty full of yourself. After finishing the intarsia area, you drop the contrast color, and finish the other half of the round with the main color. Then in round two when you get to the place where you need to pick up your contrast color, you find that it is clear the heck over on the other side of the design. So, you have a quick stiff drink to reinforce your confidence, and then slip all the design stitches to the right needle, flip your work inside out, and purl your intarsia design back the direction you came. While working on the wrong side, you must also weave in your main color as you go - which happens to be running the opposite direction as the contrast color yarn, so the process requires that you grow a third arm at this point. Then when you get to the end of your design area, you slip all the sts you just knit back to your right needle, have another little nip to celebrate your success, and carry on for the rest of the round in your main color. All the even numbered rows are like this, and they each take about 37 hours to complete. Needless to say, by the time I finished the test sock, I was convinced that this was not a project that the average knitter would want to tackle, unless they are punishing themselves or are trying to increase their WIP stash.
Third (like there even needs to be a third reason why I bagged this idea), I got a bit shy about approaching the fine folks at Stone about the concept. I'm good at a lot of things that go into conceiving and producing products, but I am not a marketing/sales type of person. I had seriously thought of asking help from a friend who is in sales so I could put together a presentation and know what the heck to ask for, but since reason #2 was already nixing the program, I never even bothered.
So I completed one sock, and I did attend the 13th Anniversary Festival in August with hubby and friends to celebrate the success of a fine brewery, and then said sock and the remaining skein of yarn went into the "trunk of shame." 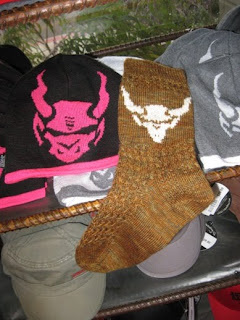 That was until a couple of weeks ago. My friend Shelly, an excellent knitter, spinner, and all-around fiber enthusiast, and I decided to have lunch at Stone one day. They built a new facility a couple of years ago with a nice restaurant and a terrific beer garden area which is a beautiful place to knit and sip (a cask-conditioned porter in my case that day). I took The Sock with me because I though it would be a hoot to take a picture of it next to some of their other gargoyly merchandise. To my surprise, they 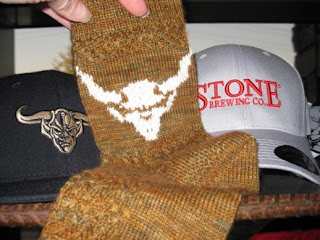 had a very similar epiphany about their newest logo, and had put it onto knitwear, too! Not socks, of course, but they had it on the ever-popular beanie hat in all sorts of colors!
I'm feeling pretty darned validated about my beer logo concept now, and am actually going to finish the second sock (someday) - even if it's just for my own beer drinking man.
Cheers-