Wow! What a year 2009 was for my creative side and my career. I've been excited about carving out some time to write this post for the last two weeks. I just love looking back over a year to see what I accomplished and learned. Too often, I don't take time to appreciate things as they happen, so I take great fulfillment from this once-a-year tradition of mine to put together a summary.

Let's start with the Knitting Category, shall we!

In 2009, I worked on 22 projects, finishing 20 of them. Thirteen of them were my own designs as noted below: 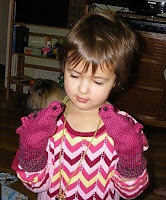 On a side note, I also whipped out my ancient sewing machine this year and made a few quilted project bags for my knitting friends - that was a fun little diversion :-)

The highlights of this list would have to be:

The reason I didn't knit more, was that most of my time was spent opening and running my new business, Knitters Brewing Company. Preparations that began in December 2008 culminated in the business launch in March of this year. The long hours spent working on the business have been rewarded many times over by overwhelmingly positive feedback from a fantastic group of customers who visit again and again - and tell their friends!

Our Ravelry group has grown from 0 to 1000 members since March (!), and I can hardly put into words the way the group has become a second home to me. The members are a lovely collection of warm and talented knitters, who are super friendly, helpful, and supportive for me and for each other. I have learned many great tips through our group, had a ton of laughs, and have also gotten great satisfaction from the opportunity to exercise my "teaching gene" through various group projects.

Highlights from the business year (aside from opening and having a great online group!) include:

What I've Learned:
- As for knitting, the Estonian Cast On and Mosaic Knitting are new techniques this year.
- As for dying, there has been tons of "learning by fire" along the way. The processes I've developed are robust and efficient - yay!
- How to post video on YouTube. That has been a great educational tool for the KAL projects. It's so much easier to show people new stitches than it is to write about them. Hubby made a great cameraman over the year :-)
- Enough html code to be a complete hack - but I get things posted on the website!
- I'll probably never make another lace weight silk shawl.

And some other cool stuff:

I must give HUGE kudos to my hubby. He has been so supportive of the new business and all the time and focus that I put into it. Not once has he ever questioned any of the wacky things I do related to this business, and his knitting jargon is really getting quite good! He's proud of my accomplishments, and that's a wonderful feeling! He recently received his first pair of hand-knit socks, and started to notice right away why people like them so much.

I learned to play Rock Band, and through the game have became great friends with my band, The Hotties. I so enjoy having this new local group of women to knit and play with, and am continually thankful for them all! Rock Band is so addicting! Santa Hubby brought us a Wii for Christmas, so I imagine the instruments will be finding their way into my Best Buy shopping cart in the near future :-)
We successfully dieted! Talk about a great team effort between the hubby and me - wow! We started on October 1st with the South Beach diet, and there was no looking back. Hubby has lost almost 25 lbs, and is getting close to his goal. I lost over 10 lbs, and achieved my goal in spite of a complete lack of exercise and all the holiday cheating I did. We both believe that one of the main success drivers is that we have become much more aware of our eating, and about food in general. We can both be caught reading labels on food products now! We still enjoy an occasional "no diet" day here and there, but now we know how to plan for it, and how to make good food decisions in our daily routine. I don't think I can count how many omelets I've made since October! I just purchased Wii Fit and it says my Wii Fit Age is 32, so I think I'm doing OK.
So thanks to everyone for their support this year - I look forward to a fun and creative 2010! My next post will be the other half of this annual tradition - looking forward.
Cheers!
Posted by Chief Executive Babe at 12:53 PM