A topic of recent discussion in our online Ravelry Group has been the variety of methods that can be used to do a Right Twist (RT) stitch. The RT is just a 1x1 right cross cable, but it gets a special twist designation because... well because it's special, I guess. 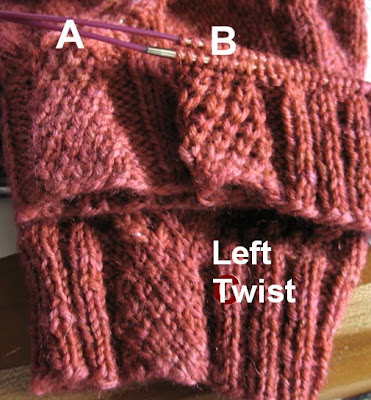 So, at this point in the comparison, I'm standing by Method A. I'll have an opportunity to try Method C in a few days, and will post my findings. This is going to be such an educational pair of socks! 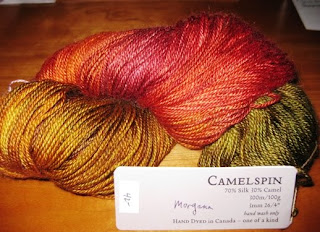 Now - for my new WIP!!! I couldn't resist the skein of CamelSpin that I bought in November any longer! After much deliberation about what to make from it, I decided the 300m would work for a little shawlette - particularly if I started top-down so I can gauge my yardage as I go. The ironic thing about this is that I have a full-sized shawl on the sticks right now that is really pretty, but I don't like working on it very much, and recently vowed to never make another one. Just goes to show you what kind of mischief a luxurious new skein of yarn can talk you into. 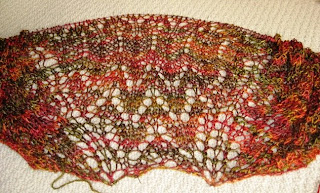 In order to have the finished shawl be big enough to be called a shawl, I decided to pull out some bigger needles for this project. CamelSpin is roughly fingering weight yarn. For my first attempt at this project, I whipped out my beautiful rosewood size 15s that I've never used since purchasing them from a lovely lady at last years Stitches West. Her name is Deborah, and her store is Asciano Fiberarts Tools. I was all excited about going back to her booth this year to show her what I did with her needles, but alas, that needle size was just too big to give any stitch definition to the lace pattern I'd drafted. So... I backed off to size 11 and started down the path again, this time with much more success. Above is a photo of the progress so far - it's actually going to be suprisingly large for a one-skein project (I've only used about 40% of the yarn so far.) I plan to add a bit more to the body of it, and then will move into a beaded border that will add a little weight to help with the drape.

Cheers!
Posted by Chief Executive Babe at 8:47 AM