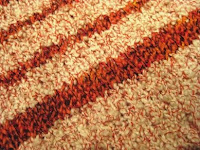 This is a story of one person's complete lack of restraint. This is my story.

Last Saturday, my knitting buddy Kelie pulled out two large bags of yarn that she is planning to destash - much of which had been destashed to her. Of course, I had to go through the goodies in the bag, not that I need any more yarn or projects in my queue, but it was there in front of me, and well... it was yarn. I was just going to touch it a little...
But then I found 8 balls of Casablanca by Stahl sche Wolle, which is a bulky cotton/poly boucle. It just called to me for some reason, it's nubby little cottony goodness was just not going to let me leave it in the bag. I don't even like knitting with cotton, and I still had to take it. All told, there was a little over 600 yards in a natural white with a red-orange thread running through it.
My second mistake was not putting it into my yarn stash trunk the minute I brought it home. Instead, it sat next to my desk, where I thought about it while chatting on Ravelry with my online friends. What could I make? Ahhh! A summer sleeveless shell would be perfect. And don't I have some other cotton boucle in my stash that I could use as a contrast color - yes! And since it's boucle, I can just knit it in stockinette, which means I can do it on the machine, which means it won't take very long, which means I MUST cast on! This is how my brain works. It's way scary sometimes.
So then I played the Justification Game. This is where I bargain with myself about how I'm going to justify starting another project. Ever do this? Generally, I tell myself I can reward myself by starting new project B, if I finish WIP project A first, and that works. In this case, however, my WIP projects are all a ways off from completion so that was not going to be a successful bargaining chip. I needed a new justification.
Housework. We're expecting visitors this week, so I have more housework on my "to do" list than usual. Because I'm a normal, breathing, human, I haven't been very motivated to do any of it, so I came up with this plan on Monday morning:
1. Shampoo the carpets, and be rewarded by getting to swatch, chart, and knit the back of the sweater.
2. Dust the house, and be rewarded by getting to knit the front of the sweater.
The plan executed beautifully through step 1. The carpets got cleaned, and I set up my machine at about 2pm. I swatched, calculated gauge, and then charted the new sweater based on measurements I took off another sweater I have that fits well. By 3pm I was working away on the back, and had it finished by 5pm. I held the finished piece up to my torso in front of the mirror and found that the fit seemed to be working out fine - yay!
I ran some errands, and then came home to execute step 2 of the plan. After getting about half of the first room dusted, I said "screw it!" and headed back over to the knitting machine to knock out the front of the sweater. By 8:30 the front was done and I spent the rest of the evening seaming the sides and shoulders while I watched TV.
On Tuesday, all that was left was crocheted borders on the armholes, neckline, and lower edge, but I was feeling some major guilt over my Day 1 behavour. I ca

me up with a new plan to tackle four significant housework tasks by alternating tasks and crochet time. I was much better disciplined on Day 2 - finishing both the housework and the sweater by 4pm - 26 hours after I started swatching.
A little blocking was required to uncurl the lower edge - I just wet it down and hung it to dry overnight. Although the yarn is bulky, the sweater doesn't make me look thick, and it's really soft and comfortable and will probably end up being high in my rotation of summer tops.
So "Thanks, Kelie!" for the new summer sweater, and the inspiration to finish the housework I needed to do this week. Now I need to plan the menus and food shopping... what can I make while I do that?
Cheers-
Posted by Chief Executive Babe at 9:09 AM