A Knitters Guide to Reviewing Movies 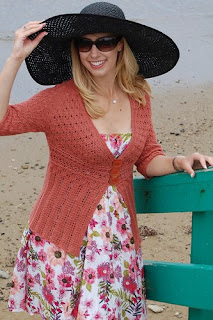 I love to watch movies. Doesn't really matter what kind of movie it is - I'll watch whatever happens to be showing. I also love to knit, and most of the time the two activities go together beautifully. I'm not really sure in which order these two loves arrived in my life, but one undoubtedly arrived to justify the other.

It occurred to me as I was watching Inglourious Basterds last night that a knitter would review a movie based on different criteria than say, Roger Ebert would. I've read Roger Ebert's review of the movie, and it is wonderfully thorough, capturing the cinematographic nuances of Tarantino's use of 35mm film, the rich performances by actors whose breadth suprises us, the brilliant script which provides the much-needed alternate ending to Nazi occupation, the tactical sparcity with which key characters are presented, and a brief summary of the entertaining story line. He covers every topic on the Movie Reviewer's Checklist, except... Can you knit to it?
I enjoyed Inglourious Basterds very much - I find Tarantino's stories entertaining in plot, as well as in presentation. I must say, however, that I was disapointed by my lack of knitting productivity during the 2 hour and 33 minute long feature due to his frequent use of subtitles. The movie's setting in German-occupied France necessitated that a significant amount of the dialog was in French or German. Some directors handle this type of situation by having actors speak English, while viewers pretend that characters are speaking in their native tongue - a ruse that we are willing to accept based on how the actors are clothed. Tarantino instead chose to bolster the film's realism by featuring the foreign languages with English subtitles prominently - at least half of the film is done this way. I tried very hard to make progress on my new Catalina Sweater project (by Jordana Paige - shown above), but gave up after having to take many extended mid-row breaks to read and process dialog. I enjoyed the rest of the movie sans knitting, but must say that I feel slightly cheated. How cherry is the opportunity for 2-1/2 hours of uninterrupted movie knitting time?
My suggestion to American film directors for future multi-lingual works is to produce an alternate English Knitters Version of films where all spoken dialogue is in English. When the characters are supposed to be speakng a foreign language, run subtitles in that language. This way, as we knitters bob our heads up from time to time to catch glimpses of the movie, we'll gather the full ambience of the scene without losing our pattern stitch count.
So I guess the Score is... Roger Ebert: 2 thumb ups. Wendy Gaal: 2 needles down.
More on my new Catalina sweater in the next post - it's coming along well!
Posted by Chief Executive Babe at 7:28 AM