Studies in Two Colors: A Video Tutorial and Dirty Feet 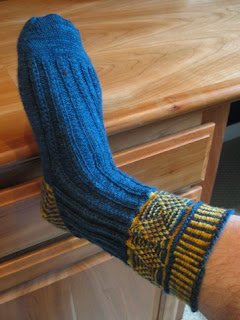 All guys need a Wingman, and now hubby has this one. I hope to have a second Wingman for him in the near future.
I've had a lot of time to knit lately since our Pink Ribbon Sock KAL is delayed a bit, and I'm enjoying it while I can! Yesterday I downloaded a new audio book, Scott Turow's Innocent, and sat out in the sun with my knitting for quite a while! Today I'm a bit pink on the knees and shoulders - sometimes I'm just sunscreened challenged.
I've made significant progress on all my Two-Row Repeat projects that I previously spoke of, most notably I've finished Wingman Number 1! Man Socks are hard to design. I think most men would prefer fairly plain socks in fairly dark neutral colors, but that is just SO boring for the knitter. I believe I have reached a nice compromise with Wingman - it has two color detail at the cuff and on the heel where most people won't see it, so men don't have to be self-conscious about their feet, and their knitters get to have a little fun while working on the project.
Wingman starts out with two-color K1 x P1 ribbing. Two-color ribbing lies more open than its single-color counterpart, but still has some stretch to it. This kind of ribbing can be worked two ways: using a mosaic technique where one color is worked at a time, or using a two-color stranded technique. Below is a video we put together that demonstrates the two methods. I was a little hoarse when we recorded this, so please excuse my sexy low voice - ha!

After the ribbing, the top of the leg features a 28-round diamond pattern that is done using Mosaic technique. Mosaic work is easy and fun, and always looks like it is more complicated to do than it really is. Next we move onto the leg, where I've used a 3x2 ribbing that includes a central slip stitch. It has a little more interesting look to it than plain ribbing, and helps with fit shaping as we move down the leg. For the heel, we're back to two-color work again, only this time there is no purling involved. I've taken the standard YO short row heel that I've used on several designs, and integrated alternate colors to form the vertical striping. I think it's so cool the way the colors angle through the heel turn!
For the foot, we continue the 3x2 ribbing down the top of the foot and switch to stockinette for the sole. I considered some colorwork around the toe area, but decided that it could add some bulk that would be uncomfortable in a shoe, so I went with a plain main color toe instead. Hubby says these are comfortable and he likes the way the tops stay up - success! Now to finish Wingman Number Two. 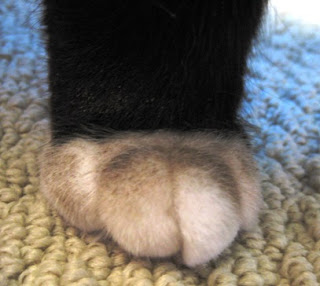 My other study in two colors comes courtesy of my cat Buddy who is black and white. Normally he keeps his white areas very white, but yesterday he came inside and showed me that he had been playing in the dirt... boys will be boys!
Cheers -

Posted by Chief Executive Babe at 7:35 AM