Sometimes I Am So Freaking Smart

I finished my iPhone purse today - yay!!!  What I had left to do was the twisted cable purse strap.  Since it was something I haven't talked about before, thought I'd take some photos along the way. 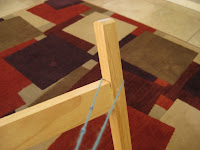 I read somewhere that you should start with a length of yarn about 4 times as long as the final twisted cord you want to end up with.  Now I wasn't sure if that included the initial fold or not so I decided to err on the make-it-too-long side.  I wanted my strap to be about 40" long, so I measured out 160" of yarn, folded the yarn on itself at that point, and then pulled off enough yarn to get back to the other end.  At this point, I have a double thickness of yarn, 160" long.  It seems really too long, but better that than the alternative. 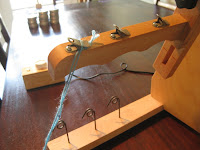 Next, as I wanted to bling it up at bit, I strung 06/0 beads onto one of the strands of yarn, and spread them out so that they were spaced every 1-1/2 to 2" as shown above.

Now it's time to start twisting.  I slipped the folded end over the leg of an inverted table so I would have something to twist against.  Then I tied a knot in the opposite end to hold the two ends together.  Stuck my finger in there, started twisting, and then had a total brainstorm.

Why not let the skeiner do the twisting???!!!  So I skootched the whole setup over toward my electric vertical skeiner and clipped the knotted end onto one of the arms.  Then I pulled the table back away from the skeiner until the yarn was not dragging on the floor.  Turned on the skeiner, et voila! 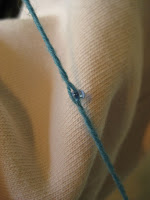 I can't even begin to guess how much arm fatigue this saved me!  I let the skeiner run for a while, checking the results periodically until I decided it was tightly twisted enough. 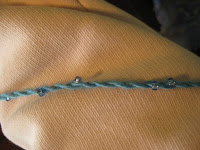 Now it is time to let the cord twist back on itself, much like plying handspun yarn.  Because it was still longer than my armspan, I had Mr. Wendy help me hold the twisted cord tight while we folded it in half and let it twist together.

At this point, the cord was twice as long as I needed it to be.  I guess that original estimation of starting out with 4 times the length includes the intial fold.  So I thought what the heck - lets try twisting and folding it again. By gosh - it worked! 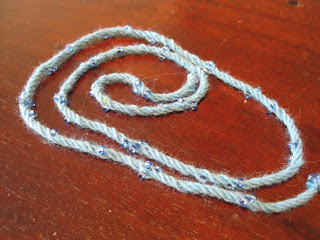 To finish the cord, I tied a knot in the unfolded end to keep it from coming untwisted, and trimmed the uneven ends.  Then, using thread and needle, I sewed the cord into my purse.  I'm pretty darned happy with the results! 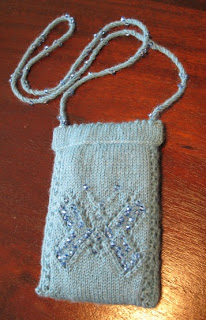 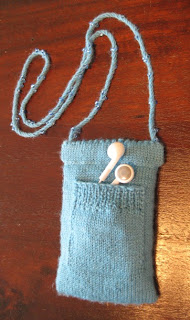